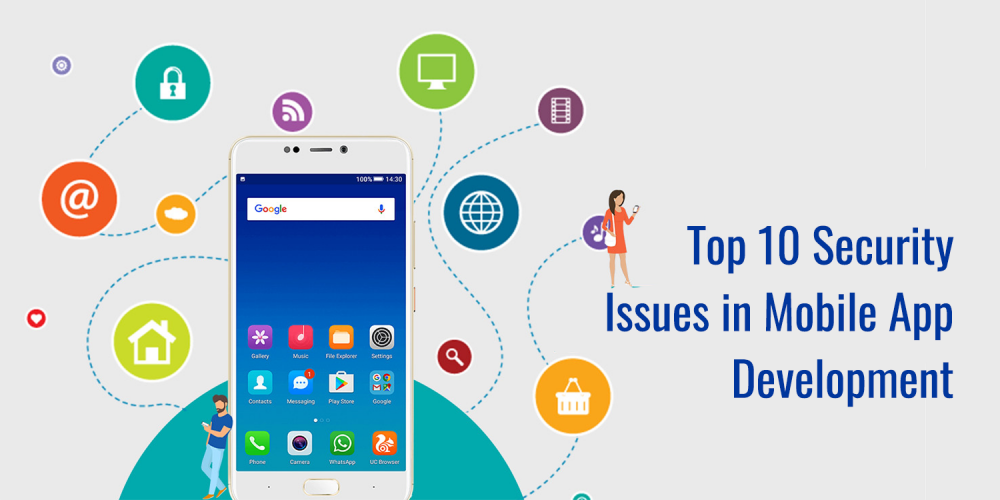 Since the inception of the mobile era, the use of mobiles, as well as mobile applications, is growing at a rapid speed. This article will focus on 10 Security Issues in Mobile App Development.

According to the stats, there are more than 5 billion mobile phone users and 3.7 billion unique mobile internet users in the world.

With this growing number of mobile phone users, companies are investing more and more into mobile application development.

This investment is causing fierce competition among apps in the app stores. But is that all that is happening because of the heavy usage of mobile apps? The answer is no.

It is also paving ways for hackers to steal important data.

There are plenty of apps that carry data of millions and yet are vulnerable because proper security controls haven’t been added during the time of development.

Hackers keep looking out for loopholes in an app if they achieve to find one, data of millions of people get compromised.

In order to develop apps that are highly secure, developers need to be cautious while developing the app.

Want to know what things you need to focus on while developing an app that isn’t prone to hackers?

Here are the top 10 security issues in mobile app development for the year 2020.

If you are anyhow related to coding then you must be aware of the fact that there are many online portals that allows you to use ready-made codes and frameworks.

And when someone picks those codes and use it for the development of their apps, they unknowingly keep the door wide open for hackers.

So, if you want to develop a secure app, it’s better to either verify the codes before using or don’t use it at all.

This is especially important for those who are building an app that holds sensitive user data.

You might be developing an app that needs your users to enter credentials like username and password. But are you sure that the details they are sharing are secure enough?

In 2014 Starbucks was the 4th highest-grossing app in the USA with over a whopping 10 million users.

The app users needed to enter their username and password once and then use the app to choose what they want, make payments, and many more things.

But the issue with the app was that it stores the credentials in plain-text. And one day, CNBS reported that the data of the Starbucks app has been compromised.

Just within 24 hours, the app lost 3 million users making it go on 26th position from 4th in the USA. Later Starbucks did release an update but it was already too late.

Most of people use the same username and password for multiple accounts and that’s why it is advisable to keep the stored data encrypted so that even if the hackers get the data, they won’t be able to decrypt it.

Developing an app is all about writing codes and then bring the app to life. And that’s why it is crucial to write codes that don’t have any loopholes.

If your app has loopholes, it can be tracked by hackers and if tracked, the data stored can easily get compromised.

This is probably the most common issue with mobile apps. The majority of the times, app developers fail to properly implement it. And the lack of proper transport layer protection paves way for hackers to exploit your app and gain access to crucial data.

Not Testing The App Multiple Times

Also, for testing, you give access to the app to a few people whom you trust.

By allowing a few people, you can gather sufficient feedback and also explore if there’s any loophole in the app.

In this way, you can better access the app and also modify the issues that it might have.

Many developers develop a highly secure app but they often forget the fact that their server-side security is equally important.

And if the server-side isn’t secure, it may lead to loss of sensitive data like passwords, credit card detail, location details, etc.

Developers need to focus on both the app as well as the server-side for developing a system that can be trusted by millions of users.

The better security you provide the more are the chances of thriving.

As an app developer, you need to think of many things and one such thing is what if the device that your user uses gets stolen?

While it is not necessary for you, it still involves your app and that’s why you need to think about it as well.

Developers often develop an app in such a way that it stores much crucial information like the credit card details, passwords, username, etc. in the device memory along with the server-side.

However, this can also be a major issue if the device gets into the wrong hands and your app data will act as the source of details which can result in loss of sensitive data of the user.

Do you know that adding unnecessary features can also be a major issue for your app? The common saying “the more the merrier” doesn’t apply here.

Developers add a bunch of unnecessary features in an app just to attract more users but the fact people just don’t hate such apps but this can also act as a loophole in the app.

The addition of tons of features in the app often makes the app vulnerable to security breaches.

Also, as more features need more permissions, the loss of data after a breach will also be more. To avoid this, it is better to add only the features that are necessary.

Not Protecting The Device With Enterprise Mobility Management

Enterprise Mobility Management works get when it comes to protecting your app from data breaches.

This maintains a strategic distance from the expulsion of inherent security that a versatile working framework offers to guard the information for long.

Utilizing an EMM will likewise give an approach to validate clients before propelling an application and can be utilized to apply different security arrangements to avoid information hacking.

This a must-do: developers should never forget to use authorized API codes in the app. Mobile security experts advise that to have a central authority for the entire API in order to make it highly secure.

So these were the top 10 security issues in mobile app development that you need to consider in 2020.

Now if you plan to develop an app this year, this should your go-to list for understanding the don’ts of the app development industry. All the best. 🙂

We believe that these 10 Security Issues of Mobile App will help you to plan your business and website. D5 Creation is one of the leading WordPress Themes developer for Personal to Corporate Websites. All of the are Responsive, they are Mobile Friendly. You need not script separately for your Mobile Apps operation and your security concerns will be reduced for Mobile Apps if you use our Award Winning WordPress Themes for your Websites. You can find the Free Versions of those Themes at WordPress.org.