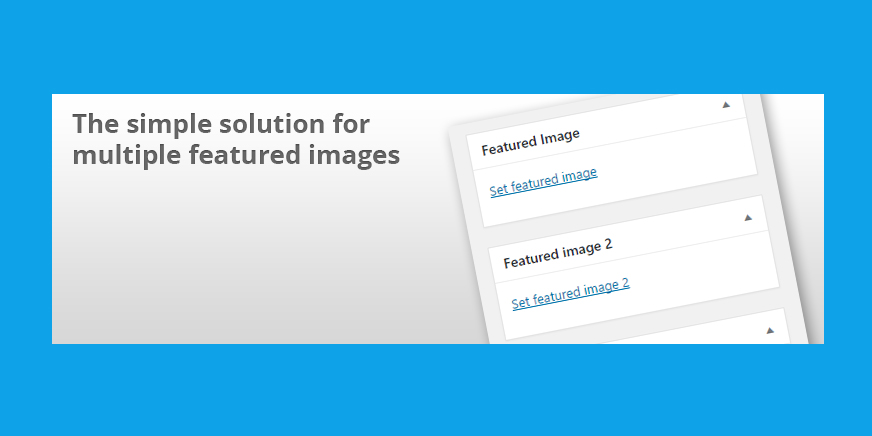 How to add multiple featured images in WordPress?

The post thumbnails feature which is also referred as Featured Image is continuing to be a popular visual element since it has been introduced to WordPress in the version 2.9. It became popular and now is considered as a significant part of the WordPress look and feel. Thanks to this feature it has become easier for users to attach images to posts and pages. The whole difficulty of uploading, copying image URL and adding the image as a custom field could be avoided with this easy-to-use feature. For any WordPress veteran or website developers it does not involve any big learning curve, but when it comes to new WordPress authors or clients, you need to explain the feature in detail.

Why you need featured images?

Why are thumbnail images considered so important for the look and feel of a website? Well, they are invaluable because they quickly grab user attention and before the users actually have any hint what the post is about it is the thumbnail image that draws their attention. Moreover, a featured image is shown next to a post or page also get displayed on your social posts when you share them on social platforms. With thumbnail images whether on a web page or social media you can make your posts more visually appealing. When you deck the alternate tags of the images with target keywords these images also enhance the SEO quotient of your website. Web users who search contents through image searches can find your website with featured images coming on search results.

Thanks to post thumbnails feature you can set a single Featured Image for either a post or a page very easily. You can do it just with the help of the meta box provided for it in the WordPress admin dashboard. All you need to do is to click on the “Set featured image link which will open the image dialog and then upload an image or select a particular image already there. Now just click on the button to use it as featured image. While this process is simple and can effectively work for most posts, but when you need to use more than one image for a single post, you need to do a little extra that we would explain here.

Where you need to use multiple images in a post? Well, presumably you need to use several images particularly to create a portfolio of a product or offering. When you look for multiple post thumbnails or multiple featured images or similar sort, all you get are the post attachments. But what can you do when you need more thumbnail images in addition to the post images which are already there?

You have come to the end of all your worries in this respect if you have come across a plugin for multiple post thumbnails that you can utilize for this purpose. Why not make some little changes and integrate the plugin to the theme so that you experience more ease than using the same as a separate plugin? Yes, you can do it and can make the WordPress experience better by allowing more ease in using multiple featured thumbnail images right from the theme and without a plugin help.

A vast majority of WordPress websites these days do not need to have much concern over using featured images just because there is plenty of quality WordPress themes that come with built-in support to publish and display featured images in a post. But at certain times when you need to use multiple images as featured little technical changes are required.

Among the many tested and tried ways to add featured images to your website post using plugins is the most value-added practice. There are several useful plugins that we can name in this respect. Almost all of these plugins can easily be integrated with your WordPress website to enhance the functionality. Some plugins like Multiple Post Thumbnails also comes with an admin area allowing several images with just a click.

When it comes to adding featured images in any WordPress websites there can be two gross situations that you need to address differently. Let us explain them here below.

Suppose you want to offer a list of thumbnails of various blog post entries in your website and obviously this requires using an image with a particular size and dimension. But when you want to use this same image for the respective blog post page, the image quality suffers. It is likely to happen because of the shortage in pixel counts when a small image is used to fulfill a bigger space. This is why a second featured image is required.

The second scenario is about fitting the same blog post image in a slider or similar area. In most cases, the requirement on size and dimension of the two areas are entirely different. Naturally, when using the same image in both places, it may not fit perfectly in both. Either the image in the slider or the blog post image can lack optimum quality and required size.

Now that you have known how to add a featured image to your post, you need to know the steps to add another or several ones. This requires tweaking or configuring your WordPress theme a little. Just copy and paste the following code right inside the post area where the image needs to be displayed. Here below is the respective code:

To conclude, thumbnail images offer a richer way to make your WordPress contents and pages more interactive and attention grabbing. Just by taking care of thumbnails in various usage scenarios as described above you can utilize them to the feature to the fullest advantage to your website.

WordPress Themes those can be useful for multiple featured images

You may know that D5 Creation Themes are developed maintained all WordPress Coding Standards. Our Themes are Listed at WordPress.org as well as in our Theme Gallery. The renowned Site Collectiveray has also featured our Innovation Theme in their Featured List.


7 Smart Tricks to Handpick the Best WordPress Theme for Your Website
Start Your Website Correctly: 15 Tips for Designing for WordPress

Darshan Patel is an Analyst & Storyteller at Nimblechapps - the coolest hybrid app and unity game development company. He believes in using a variety of strategy to create business’s online presence that delight and deliver